“Making another early start, I left home on 4 July to catch a train from Cheltenham to Edinburgh. My plan was to stop off at Cramlington in Northumberland to spend an hour or two with Adam Harvey, Deputy Clerk at Cramlington, and Elaine Brown, Clerk of Newbiggin by the Sea before reaching Edinburgh in time for a meeting at the University. In the preceding days, it was hard not to be anxious about the field visit to Scotland’s capital with five Community Governance students – train strikes, planes cancelled, and a surge in Covid infections were all threatening its success. Two of the students had Covid in the family in the days immediately preceding the visit.

In the event, everything on the first day went smoothly – almost. Every train was on time and I arrived at Cramlington on the dot of 12:09pm as planned. Elaine and her 3-month old son Tobias picked me up and we drove a few minutes to Northumberlandia, an intriguing visitor attraction on the edge of Cramlington. We met up with Adam who explained the story of this former open cast coalmine, re-imagined as a woman lying in the landscape. It is a popular country park where people clearly gain amusement from climbing the hills that represent the woman’s nose and her bust. Cramlington is now a thriving town that benefits from being near Newcastle and, by all accounts, the company that owns Northumberlandia has a very good relationship with the Town Council and its community.

The four of us then went to a nearby pub for lunch where I found out more about Cramlington and we discussed the course. I was sorry not to see Newbiggin by the Sea but time was short as I had another train to Edinburgh to catch from Morpeth. On the other hand, I was delighted to see blue-eyed Tobias who was a delight throughout and Elaine who has taken an understandable break from studying until next year.

I arrived in Edinburgh at exactly the right time but then took the short walk to Motel One on Market Street only to find that I should have been at Motel One on Princes Street! Fortunately, there was time to spare. I met up with the five students whose journeys from Sussex, Oxfordshire and Cheshire had all been smooth and straightforward. We walked across to Old Town to meet up with the inspiring Oliver Escobar of the University of Edinburgh who researches community empowerment. We spent a fascinating hour and a half discussing the role of community councils in Scotland and the success – or not – of Scotland’s Community Empowerment Act 2015. It seems that, despite a devolved administration in Holyrood, the impact of the UK Government’s centralising power on local government remains strong.” 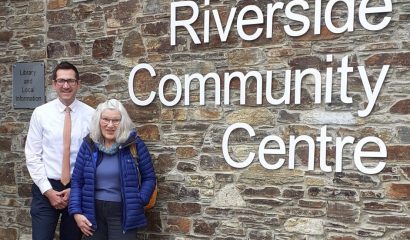