Community Governance offers a range of advanced qualifications which are all distance learning with residential study days. The qualification looks at the way in which people and organisations work together and independently, making decisions for the benefit of a local community. Study for a qualification awarded by De Montfort University (DMU):

Choose your qualification – students are able to achieve the Level 4 qualification without pressure to proceed to Levels 5 and 6.

Click here to find out how Community Governance will benefit your council.

Registration for the 2021 qualification has now closed. If you are interested in applying for the 2022 academic year please email commgov@slcc.co.uk 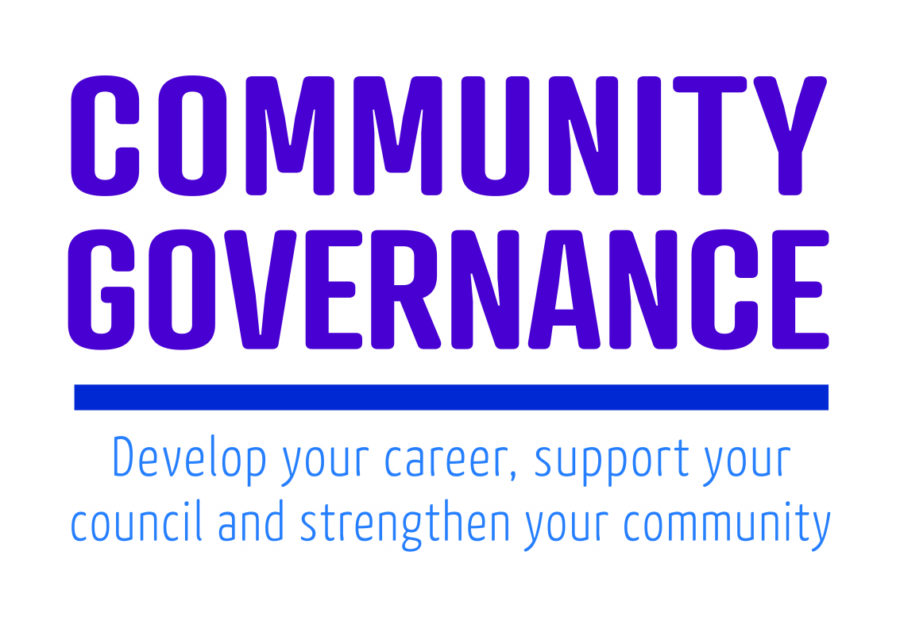 DMU have confirmed that they will be delivering an MA in Public Leadership & Management in 2021. To find out more please contact Steven Parker at DMU steven.parker@dmu.ac.uk

The Community Governance drop-in sessions are an opportunity for those interested in progressing to the next level after the CiLCA qualification, to find out more information about the Community Governance qualification and being a student on the course. You will be able to ask your questions to members of the teaching team and have an opportunity to hear from current students on the course.

If you would like to attend one of the Community Governance drop-in session webinars, please click here to view the available dates.

How do I study?

Community Governance is a distance learning programme – you study at home or at work.

“Due to Community Governance (CG), Cornwall Council is now evaluating their Local Maintenance Partnership Scheme and I have been influential in changing the scheme from its current format. I understood that studying CG would add value to my councils but my research has gone one step further and is now influencing the principal authority! So a huge thank you to Elisabeth Skinner MBE and the CG Teaching Team.” Julie Larter FSLCC, Carlyon Parish Council and St Austell Bay Parish Council

What will I learn?

Academic Leader
Elisabeth Skinner MBE Teaching Fellow, Cert Ed, BA Hons, FSLCC joined the SLCC in 2012. After an early career in school teaching, she worked at the University of Gloucestershire from 1989 to 2012 as lecturer.

Assistant Course Leader
Dominic Stapleton BA Hons, FSLCC, Dom is a first class honours graduate of the University’s programme. Dom previously worked at Didcot Town Council and worked as a consultant up until 2018. Dom has completed the PGCAP and is a Fellow of the HEA.

Module Tutor
Johnathan Bourne BA Hons, FSLCC has been Town Clerk at Royal Wootton Bassett since 1987. In 2013 he completed three years as SLCC Chairman and again in 2016. He has completed the PGCAP and is a Fellow of the HEA.

Module Tutor
Linda Roberts BA Hons, FSLCC is the Town Clerk at Melksham Town Council. Linda has a first class honours in Local Policy and in 2015 was President of the SLCC. Linda has completed the PGCAP and is a Fellow of the HEA.

Module Leader
Pauline Whitehead BA(Hons) FSLCC has been the Clerk to North Horsham Parish Council since 2016. Prior to that she was at Cranleigh Parish Council for 13 years. Pauline achieved a first class honours degree in Community Engagement and Governance in 2012.

Personal Tutor
Sue Hobbs has a first class honours degree in the University of Gloucestershire’s programme for local council officers. She has worked for many years as town or parish clerks.

Personal Tutor
Penny Bryant BA (Hons) FSLCC has been the Parish Clerk for Somersham for 21 years and the CiLCA trainer for Cambridgeshire and Peterborough Association of Local Councils for approximately 10 years. Penny achieved a degree in Community Engagement and Governance in 2011

What will it cost?

The tuition fee for each qualification is £6,300 (£3,150 per year) normally paid in instalments over two year’s with an initial deposit of £315 (10% of the years fee) which will be deducted from the invoice.

Hear from our students...

“I have just completed year 1 of Community Governance Level 4 and have learned so much already. Whilst CiLCA gives you a great grounding in the role of the clerk, this takes it to another level. I feel much more confident about the advice I offer councillors and how best to support them in running the council. I was hesitant about starting this, but have no regrets – whilst it is hard work it has been thoroughly enjoyable. Meeting fellow clerks on the same journey has been an enormous support, and continues to be with the day to day queries that are part of our normal day in the office.” Samantha Heynes PSLCC, Cuckfield Parish Council

“Not ‘just another qualification’, it develops your ability as a professional clerk to advise your council, generating confidence to meet new challenges. The modules are structured to expand on legislative and procedural knowledge at Level 4, and to develop critical thinking, analytical, and leadership skills at Level 5. The tutors understand the life/work/study pressures, are always supportive and answer queries in a timely and detailed manner. If you/your council are concerned about the cost, consider it an investment that will repay way beyond monetary value!” Angie Hurren PSLCC, Broadclyst Parish Council

“I am so happy I signed up for the course it has helped build my confidence as a clerk. I was always aware of the various procedures to follow but it helped me have a greater understanding as to why. A great course for any clerk backed up with amazing support from the tutors.” Emma Sylvester, St Andrews Parish Council

“I would like to thank the tutors on the Community Governance course for their patience, constructive criticism, support, encouragement and much more. You have been brilliant in allowing me to grow, reflect on my role as parish clerk, gain in confidence and succeed. This has been an entirely positive experience of higher education.” Belina Boyer PSLCC, Clipstone Parish Council and Bleasby Parish Council

“Having undertaken a degree straight out of sixth-form, the last thing on my mind would be to do another. However, with the flexible learning style of distance learning and subjects directly related to my job I thought – why not? At Level 4 of the Community Governance Degree, the Local Council Law & Procedures Module has enabled me to tighten up on our processes. As a fairly new manager, the Managing People module has been me feel more confident in tackling staff issues whilst at the same time making sure we do right by our staff. No one could have predicted the Covid-19 pandemic but I think everyone, from us students to the teaching staff have adapted really well and despite not being able to meet in person, we have had access to them through virtual tutor groups and module seminars and even managed the odd couple of virtual socials (without the hangover!) – if anyone has the chance to start their Community Governance journey and are hesitant – don’t be – the support you get, the friends you make and the knowledge you gain is second to none!” Andrew McKenzie PSLCC, Town Clerk, Dawlish Town Council