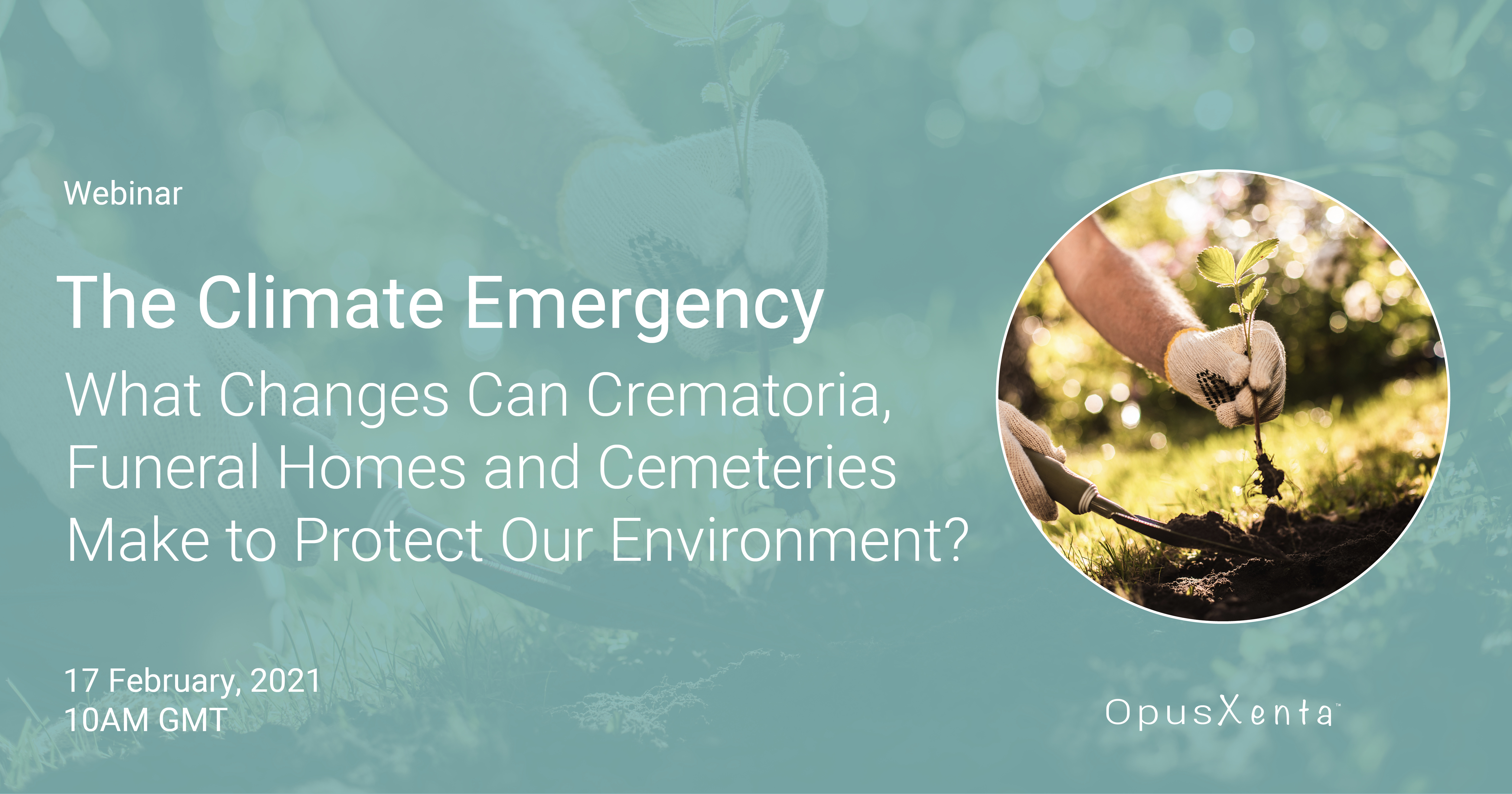 It is impossible to put a price on the comfort which services like burials and cremations have brought to the bereaved in the last few hundred years. However, recently, we have become increasingly aware of the unintended consequences of some of these actions and the negative impacts that they are having on our environment. We will be discussing this in more depth in our webinar on 17th February with Brendan Day.

Funeral Directors, Crematoria, and Cemeteries alike are facing a significant challenge in the Bereavement Sector – the climate crisis. Namely the impact that funerals, burials, and cremations are having on the environment and how these ways of putting our loved ones to rest have unknowingly been contributing to Global Warming and Climate Change.

Primarily, when we look at cremations, there is a major concern with rising carbon dioxide levels. When a cremation occurs, large quantities of CO² emissions are expelled into the atmosphere, requiring huge amounts of energy to cremate one single body. In contrast to a natural burial, cremated ashes are sterile and do not supply any nutrients back into the earth. Because of cremations, millions of tons of carbon dioxide emissions are produced each year, causing significant concern for environmentalists, and pushing us to re-evaluate the cremation process.

Burials, too, have their own sets of challenges regarding sustainability. Toxic chemicals which leach into the soil can be detected in groundwater around cemeteries, exposing funeral workers and the natural environment to potential hazards. Furthermore, the intensive maintenance of the green and luscious memorial plots is extremely demanding on carbon fuels to power lawnmowers and other equipment.

And it is not simply the act of burials or cremations that is doing the damage, but the entire process. Today the use of chipboard with quality veneers is common for the construction of less expensive coffins. However, the resin composition can contribute to pollutants in the soil, and granite is imported from overseas used for headstones does not support the local ecology. Casket wood is also a major worry, knowing deforestation is already playing a huge part in the climate change we see around the world.

So, the big question is, how can we limit the damage that we are doing to the environment? How can Funeral Directors, Crematoria, and Cemeteries all ensure they are following best practices when it comes to protecting our planet?

It cannot be avoided that approximately 1% of the populace die each year, and the dead must be laid to rest. We sadly cannot avoid the fact that both interments and cremations have negative impacts on the environment and always will do to a degree, no matter which process we use. However, we do have ways in which we can minimise the impact on the environment. To learn about the wide range of advice and systems which can be implemented to make a positive change in our sector join the webinar with OpusXenta and the FBCA on 17th February.

*Commercial news content is written and provided by the supplier. The publishing of this piece does not imply endorsement or recommendation by SLCC for goods or services*

Back to Commercial News